Podcast #54 - What Would Lewis and Clark Text Message to Thomas Jefferson? 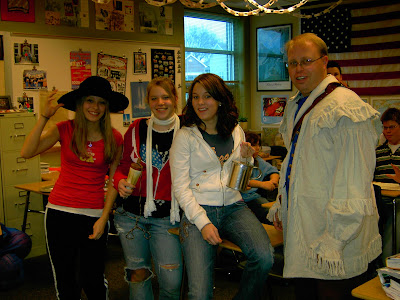 Hello. Last week we studied one of my favorite topics in the curriculum - the Corps of Discovery. I think this is such an amazing story with so many different angles from which to approach it - heroic, adventure, risk, etc.
We have done various activities over the years to bring it alive to students. Around 4 years ago I was awarded a grant through the Friends of the Missouri Archives Lewis and Clark Bicentennial Commission to purchase the clothing that would have been worn by a member of hte Corps of Discovery. I did my research on the clothing of the era - the most complete resource I found was the book Lewis & Clark: Tailor Made, Trail Worn--Army Life, Clothing, & Weapons of the Corps of Discovery . I then worked with the James Country Mercantile - a local business here in Liberty that outfits Civil War reenacters and other historical time periods. I typically come to school one day a year in the entire outfit. Some years I have even put red coloring in my hair and portray William Clark. A couple of years ago I came to school in the outfit and then sat through 4 hours of parent teacher conferences dressed as a member of Corps of Discovery - the scary part is some of the parents did not even ask me about it and most have assumed that was the way I usually dress! More details about the outfit in the podcast.

There are numerous videos available on the Corps of Discovery which work well in the classroom. Some of the videos I have used in the past include: BIOGRAPHY: Lewis & Clark: Explorers Of The New Frontier from A&E and The Techology of Lewis and Clark by the History Channel. The video I am currently using to show my students is Great Journey West - Lewis and Clark by National Geographic - orginially created as an IMAX film this 45 minute video has some of the most beautiful and authentic footage of the trail. If you do show your class the video don't forget to show them the bonus material on the DVD that includes a "how they made the video" segment which is also top notch.

This year I also thought I would mix in a little of modern reality to the study of the expedition and I asked my students to imagine that one of the members of the Corps of Discovery was using a cell phone to text message Thomas Jefferson about an event along the journey - the first sighting of the Pacific, the discovery of the source of the Missouri River, etc. I gave them a copy of an IM glossary that I took off the Internet - I did some editing of course. They had to use 10 "IM terms" in the exchange. The students thought it was great. As several educational bloggers have stated in the past - we shouldn't be upset that our students use IM as a way to communicate, we should be impressed that they have created a useful and practical language to quickly communicate with each other.

Direct link to Podcast #54 - What Would Lewis and Clark Text Message to Thomas Jefferson? - MP3 Format - 15:00 minutes
Posted by Eric Langhorst at 8:13 AM