FREE Digital Citizenship Week Webinar with Cable in the Classroom 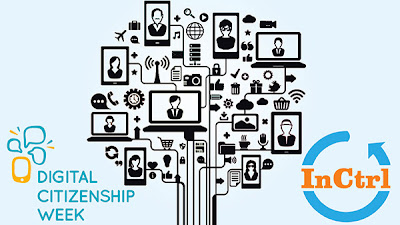 October is official "Connected Educator Month" and next week there is a focus on how we teach our students to be good digital citizens as we celebrate "Digital Citizenship Week" between October 21-25, 2013.

I recently wrote a guest blog post for Cable in the Classroom's blog entitled "Teaching Digital Citizenship Everyday" which you can read here.

Please register for the webinar if you can make it.  We would love to have as many perspectives as possible.  If you are unable to participate live there will be an archive of the event available at a later date.

Posted by Eric Langhorst at 10:57 AM No comments:

This a copy of the weekly e-mail that I share with my peers.  It is a way for me to pass along the great things that I see each week on social media.

Last week was a little crazy with conferences so I didn’t send out my weekly Thursday “As Seen on Twitter This Week” e-mail.  I added a few more links this week to make up for it.

If you only read a couple I would recommend the first two links – social media impacting the writing of our students and why girls are not pursuing college computer degrees.

I also wrote a couple of blog posts this week that might be of interest:

Does McDonald’s Have A Better Learning Space Than Your Classroom?
http://www.speakingofhistory.blogspot.com/2013/10/does-mcdonalds-have-better-learning.html

The Government Shut Down – Graphs to Use For Writing Prompt
http://www.speakingofhistory.blogspot.com/2013/10/the-government-shut-down-graphs-for.html

The Dumbest Generation? No, Twitter is Making Our Kids Smarter
http://m.theglobeandmail.com/life/how-new-digital-tools-are-making-kids-smarter/article14321886/?service=mobile&utm_content=buffer3e05a&utm_source=buffer&utm_medium=twitter&utm_campaign=Buffer#!/
- how is the use of social media by our students impacting their writing

Why Are Girls Not Pursuing College Computer Degrees
http://www.edudemic.com/girls-computer-science-degrees/
- I have been reading a lot about this topic as the father of two girls

Making the Most of a Small Space
http://www.scholastic.com/teachers/top-teaching/2013/09/making-most-small-space
- ideas on organizing your classroom to make the most of the space

Howard Gardner “Multiple Intelligences” are not ‘Learning Styles’
http://www.washingtonpost.com/blogs/answer-sheet/wp/2013/10/16/howard-gardner-multiple-intelligences-are-not-learning-styles/
- some great comments from Mr. Gardner himself on M.I.

How Big Is A House in Different Countries
http://shrinkthatfootprint.com/how-big-is-a-house
- interesting comparison of how much space we really need from a global perspective


- the use of hashtags is one of the most important skills to getting the most out of Twitter
Posted by Eric Langhorst at 10:44 AM No comments:

Almost three years ago - back in April 2010 - I did a podcast review of Robert M Edsel's book "The Monuments Men" and discussed some ways it could be used in the classroom. It is a great book about the true story of how Allied troops were able to save the artwork stolen by the Nazis in World War II before it was destroyed.

I was so excited this week to happen upon the trailer for the upcoming movie based on the book.  It will be out in December 2013 and has enough star power to ensure that it will be a box office hit for the holidays. Check out the trailer below.

Anyone else read this book?  What are your thoughts? Please leave a comment on this blog post.  Thanks.

Posted by Eric Langhorst at 7:28 AM No comments:

Does McDonald's Have A Better Learning Space Than Your Classroom? 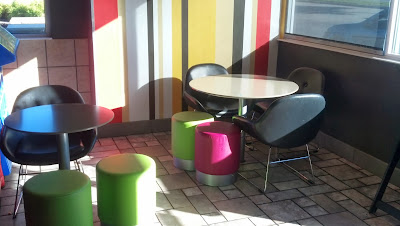 As I write my dissertation I often seek out places to write which are free of distraction.  If I try to write or read at home or in my classroom there are usually things that keep me from working on the task at hand. I don't need much - a place to sit, ample table room to spread out some items, free wifi and a power outlet.  Public libraries are great and I like coffee shops - Caribou Coffee is probably my favorite.  Sometimes I buy a drink or get a snack.

There is a McDonald's close to my house and over the past couple of months I have frequented it to work several times.  Last week as I stopped in after school to work and sat down I noticed just how many people were in the same place using the wifi.  Everyone there was using a device on the wifi - cell phones, tablets and laptops.  This perhaps isn't surprising but then I also noticed the design of the space itself.  It was inviting, pleasant, comfortable.  This McDonald's is a great, do I dare say it - a great learning space.

Then two days ago my friend William Chamberlain @wmchamberlain tweeted a picture of a McDonald's with the following text "McDonalds has better learning spaces than most schools :(" and included Ira Socol @irasocol  I retweeded it and added "Truth". 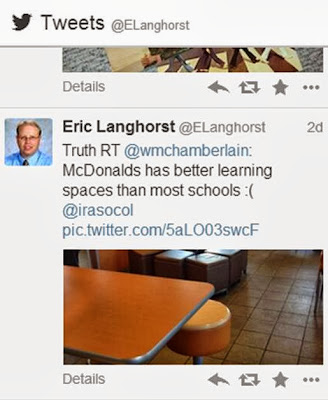 Tonight when I finished working on my paper I took some pictures of the McDonald's.  They really did a great job of creating a learning space.  I won't mind having some of this furniture in my classroom. 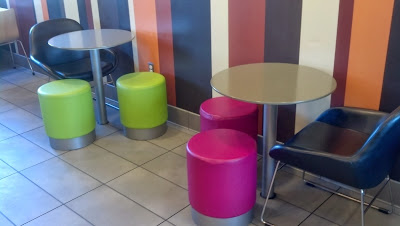 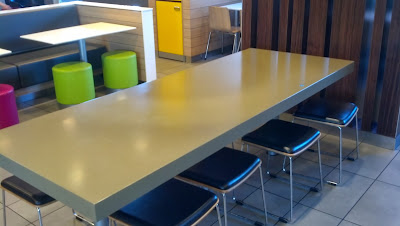 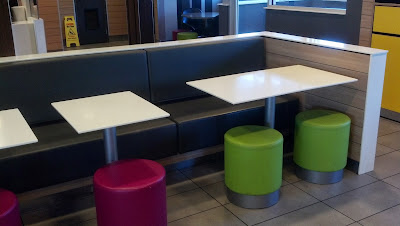 Our district has been having lots of discussions about learning spaces and where students learn in our schools.  We need to be more efficient and are discussing creating learning environments in space which it underutilized right now - including commons areas and hallways.  I have also been thinking about my own classroom.  Right now I have 31 classic student desks in my room but would like to eventually move to tables, movable chairs, etc.

Ira Socol added some additional tweets about how teachers can change their learning spaces and included some videos of learning spaces which are better than McDonald's. There are solutions and we need so start having more discussions about making our classrooms open, inviting spaces for our students to learn instead of a factory.

Do you have a classroom redesign story to tell?

Please add your comments to this blog post.  We would love to hear your thoughts and create some solutions.  Thanks.

Posted by Eric Langhorst at 7:50 AM 3 comments:

The Government Shut Down - Graphs for Lesson Plan or Writing Prompt

Want some great graphs and visuals for a prompt about the government shut down?  Check out the graphs included in this Pew Research Center report (@pewresearch on Twitter).  I first saw this in a tweet shared by Will Richardson @willrich45 today.

There are a ton of stats and charts here - great stuff - but how about starting with showing your students these two graphs and see what they infer from the data: 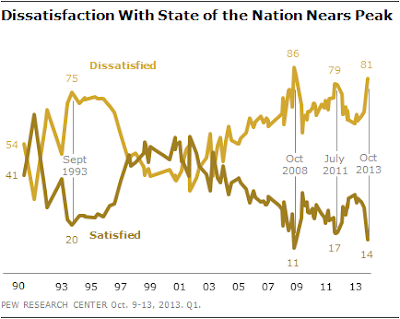 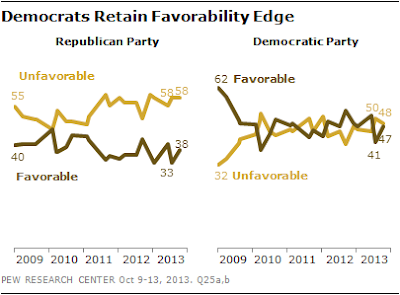 
Posted by Eric Langhorst at 8:54 PM No comments:

Today I want to share an activity I use during our American Revolutionary War unit.  The story of how Washington used spies to gather information on the British is often underestimated. Gathering intelligence was of critical importance to both sides in their efforts to win the war.

The science and art of communicating as a spy is a fascinating part of the war and one that students generally enjoy learning about in our Revolutionary War unit.

Here is a screencast I created to accompany the activity on Revolutionary War spies.

In the past I have used "George Washington Spymaster: How the Americans Outspied the British and Won the Revolutionary War" by Thomas B. Allen as a selection for my History Geeks book club with students.  It is an engaging read with lots of great stories and a code hidden within the book itself.  A great book for junior high students wanting to learning about Washington's use of spies.

If you want a more detailed book on spies in the Revolutionary War check out "Invisible Ink: Spycraft of the American Revolution" by John A. Nagy.  Great detail and more description about the techniques used by both sides in the war.

Mr. Nagy was featured in a C-SPAN author presentation recorded in New York in 2010 (52 minutes) that you can watch online here.

Do you do an activity in your classroom on spies in the American Revolutionary War?  Please let us know by leaving a comment on this blog post.

Posted by Eric Langhorst at 2:13 PM No comments:

I am a big fan of using Twitter to find resources, ask questions of peers and in general just learn about amazing things.  I find myself often saying "I saw this great link on Twitter last night...." and have found that peers are generally more willing to tip their toe in the Twitter stream if they see value in creating a PLN.

Several weeks ago I decided that I would look through the tweets which I have favorited in the past week and share some of them with my fellow teachers here at Discovery Middle School.  In my first e-mail I told everyone that the items shared in my e-mail would not always be something that I support or agree with 100% but might be something interesting or a great discussion started.  I also told everyone to let me know if they liked it or thought it was annoying.  I am now three weeks into the experiment I have had several fellow teachers tell me they enjoy the links and so far no one has told me it is annoying.

I have also found that doing this also forces me to go back over my favorites from the past week and there is always something that I had planned on checking out later but forgot.

I will start sharing the texts of the e-mails that I send out each week to share with others beyond Discovery Middle School.


Here is this week’s collection of items that I saw on Twitter which I thought were interesting.


The Horizon Report is a huge study that comes out each year and discusses what trends are predicted in education for the next five years.


The 2013 Horizon Report - What to Expect in Education for the Next Five Years
http://www.nmc.org/pdf/2013-horizon-report-k12.pdf


If you are a fan of the band “Journey” check out the online documentary on the new singer. When Journey needed a new lead singer they found him - on YouTube on the other side of the world.  It is an amazing story but will only be available online through October 7th and then it will be shown on the PBS show Independent Lens.


Other links this week:


When Did Americans Lose Their British Accents?
http://mentalfloss.com/article/29761/when-did-americans-lose-their-british-accents