The past couple of years I have wanted to start a 365 photo project but for various reasons never started. This year I decided I should take on this project. Each day during 2010 I will be taking a picture of something during the day and adding it to my collection. Some days it might be a scenic shot (as my first photo is) or it might just be something on my desk or a view outside my window.

I will be posting each of these images to my 365 Flickr photo set. I like the Flickr option for collecting my 365 photos because I can also add notes to parts of the photo which anyone can view by mousing over that portion of the photo and people can also leave comments directly to the photo. I also plan to create a photo book at the end of the year using all the images and having them on Flickr and using Lulu will make this a snap.

If you are attempting a 365 project, or just want to comment on mine, please leave a comment on this blog. Thanks. 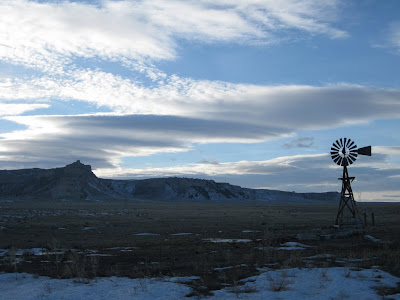 My first photo of the 2010 365 project. This photo was taken with my camera on the drive down to Cheyenne from Torrington in Wyoming. I loved the way the windmill set up the picture with the clouds and the snow on the ground. If you look behind the windmill you can see a powerline in the distance - sort of a cool "past and future of power on the Plains" message. Photo taken with my camera.

Posted by Eric Langhorst at 2:05 PM