Recovering From a Tornado and Social Media

I was a new college graduate in the summer of 1994, looking for a social studies teaching position that might also include a head boys basketball coaching job.  In June I had a couple of offers and choose Silver Lake Public Schools, a consolidated school district in south central Nebraska.  The high school was in Roseland, Nebraska - population roughly 250 people.  Little did I know that this small community will be my home for the next five years. As the only social studies teacher in the district I had seven preps a day and coached a little of everything.  This community became my family and I still keep in touch with many of the teachers I taught with and some of my former students are currently raising their families in Roseland.

I was sitting on my couch around 5:30 on May 6th, browsing through some Facebook posts on my phone and I saw a video posted entitled "Tornado in Roseland". Then I started to see other Facebook posts describing a tornado that had taken aim on Roseland and basically went right through town.  I searched "Roseland tornado" on Twitter and started seeing more posts about the damage.  Over the past several days I have followed the reports from friends on Facebook and donated to the relief fund through the United Way. You can help Roseland recover from the tornado by contributing to the United Way here.

Video and news coverage of the Roseland tornado

Social media has changed the world in which we live in so many ways, recovering from the devastating impact of nature no exception. Through pictures and posts I have been following familiar names describing their heartbreak and the work which seems daunting right now.

The city of Roseland has their own Facebook account.  I liked it quite a while ago because it has updates on things happening in town - mostly community events and announcements.  This week it has become a distribution hub of information about the clean up but it has also become something more.  The Roseland Facebook account asked for community members to write about their experiences with the tornado.  Where they were, how they raced for cover, what it was like during the tornado and how they are dealing with the aftermath.  The accounts are detailed and as I read them I notice names and mentally visualize the areas on town they are describing.  These accounts are interesting and the Roseland website is also collecting them and posting them on the town website. 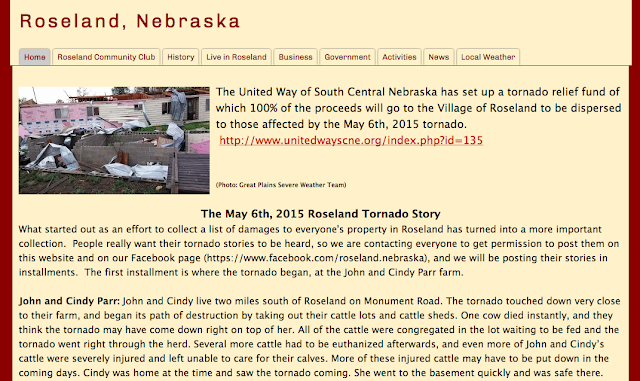 The tornado has impacted the entire community.  Anyone who has ever lived in a community of 250 people understands how close everyone is a town is and how everyone pulls together to help out.  I am intrigued by the collection of these stories as a part of the recovery process.  It keeps those of us that have ties to Roseland connected regardless of where we now live in the world.  As a history teacher this intrigues me because just a couple of days after the tornado all of these experiences are being recorded and shared while it is still fresh in everyone's mind.  There is surely something cathartic about recording these moments but it will also be such a treasure to a historian in the future who will be seeking information on how the community of Roseland was impacted by the events of an afternoon in May of 2015.