Hello. During our study of the Civil War I have always found it helpful to bring items into the classroom that students can touch, feel and experience from that time period. A couple of years ago I purchased an authentic Civil War era bullet from an artifact collector. I think it cost me about $5. It has not been fired and was found in Missouri. There is something almost magical when you pass it around the room and the students hold it in their hand - an actual bullet that could have been carried in the pocket of a Civil War soldier in 1863. 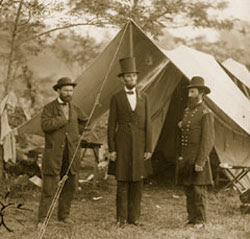 This year I incorporated a writing assignment with the Civil War bullet. The class watched a five minute segment on the Battle of Shiloh from the Ken Burns PBS Civil War series. As the video segment played the bullet was passed around the room and once it was over each student was asked to write a poem from the perspective of that bullet. Where was it? Was it shot? Who held it - a young scared 15 year old or a confident older soldier? How could that bullet change the course of history?

Today's podcast includes a few of those poems from my 8th period class. I have also included a text version of one below:

Out of
the darkness of a soldier's pocket and into the light,
Now seeing before me
that the battle is in sight.
In the hands of a soldier, shaking in fright,
Waiting to be shot from the gun and take flight.

From the trembling
hands to gun's dark barrel,
Now waiting to be shot and cause peril.
Though sometimes it feels painful, it is my job,
There are souls that I
steal and lives that I rob.

The gun goes pow... and I fly once again,
Feeling the soldier's pain as I tear through the skin.
My job is now
finished, the man falls to the ground,
Now I sit there, just waiting,
waiting to be found.

If you would like to comment on the poems or the Speaking of History podcast please leave a comment to this blog or e-mail me at speakingofhistory@gmail.com

You can subscribe to the Speaking of History podcast directly at i-Tunes here.