This is the first in a series of blog posts describing my experiences as part of the 2011 Keizai Koho Center Fellowship Program. 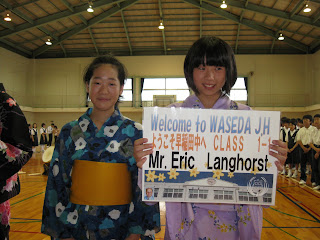 Waseda Junior High Students welcoming us to their school


This year I celebrated July 4th outside of the United States for the first time in my life.  This year on July 4th I woke up on the 16th floor of a hotel in Hiroshima, Japan while participating in a study tour of Japan from the Keizai  Koho Center.  I was welcomed to the sight of a bustling Japanese city when I opened the windows of my hotel room in the morning.  We had arrived late the night before via the bullet train from Kyoto.  On the taxi ride from the train station to the hotel the night before my first impression was the dramatic comparison from Kyoto.  The buildings in Hiroshima were much newer and the city looked distinctively modern in comparison to Kyoto.  Then the reason for the stark contrast in cities dramatically struck me - this was a relatively new city because on August 6, 1945 an atomic bomb was dropped from the B-29 Bomber Enola Gay and in a matter of minutes had destroyed much of the city.
In the previous 24 hours several of us in the group had mentioned in casual conversation that it was it was somewhat unusual that we were celebrating July 4th in a Japanese city with this unfortunate link to our own history.  Would the people we would meet in Hiroshima show any resentment toward Americans?  So far on our study group we had been the recipients of extraordinary hospitality from the people of Japan but would Hiroshima be different?
After breakfast our group set out for the two scheduled appointments on our itinerary.  First we were visiting Waseda Jr. High School in Hiroshima.  In the afternoon we were visiting the site where the atomic bomb was dropped and the accompanying world peace park and museum.  It was a full day, and just as we did for every day on this study tour, we looked forward to the adventure and the exploration.

Our bus pulled up to the front of Waseda Jr. High School.  We removed our shoes and were asked to follow the principal. It was quiet in the hallway. As we approached the gym, we noticed signs created by the students welcoming us to their school which featured American flags.  We entered the gymnasium to see a sight which surprised many in the group.  The entire student body of Waseda Junior High was assembled in the gym - absolutely quiet and standing in meticulously straight rows.  As we entered the gym, the students were smiling and offered a thunderous round of applause which continued until all of us were seated in designated chairs lined up on the baseline at the far end of the gym. 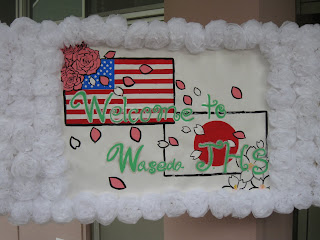 The response from the students was moving to say the least.  The students had prepared a welcoming program for us which including greetings, a traditional drum performance and signing.  They told us they wanted to help us celebrate the 4th of July since it was an important day for us.  I was moved to the brink of tears.  Just an hour before at breakfast I had a sense of uncertainty concerning how Americans would be treated in Hiroshima.  The actions of the students at Waseda Junior High answered my question and this spirit of hospitality and friendliness was repeated consistently over the course of the next couple of days.

The remainder of our school visit was a wonderful experience and our time at the peace park was excellent as well.  Each of these visits warrant their own specific blog entry so I will not expand on it at this time. I will also defer discussion on the politics and circumstances which resulted in the atomic bomb being dropped over 65 years ago - all great discussions for a different blog entry. But what I felt in that gym on the morning of July 4th was not about the past, not about a horrific war fought between our grandparents and great grandparents, not about looking at the past.  For that one moment in time, for me personally, it was about looking toward the future and an understanding that we have so much to gain from helping and working with each other. I did not spend the 4th of July in the United States this year but I will remember sitting in that gymnasium on July 4th for the rest of my life.
Posted by Eric Langhorst at 4:00 PM