2011 Keizai Koho Center Fellowship - Getting Around in Japan

This is the second in a series of blog posts describing my experiences as part of the 2011 Keizai Koho Center Fellowship Program. 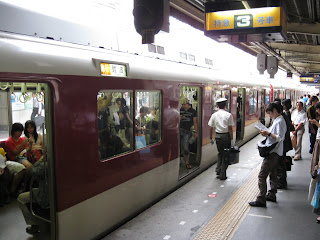 Subway in Osaka
My journey to Japan literally included a variety of trains, planes and automobiles (in addition to subways, buses and ferries).  The first leg of my journey was delayed when my flight from San Francisco to Osaka was canceled due to mechanical issues.  I was put up in a hotel in San Francisco for the night and my new flight plan now included flying to Tokyo instead and then a connecting flight into Osaka.  This new itinerary concerned me a little since I would be flying into one of the world’s largest airports where I did speak the language, had to clear customs immigration and customs within an hour to make my connecting flight.  I was more relieved when I discovered that one of the other teachers in our group would be on the same flight and we would be attempting to make this connection together.  Our flight sat at the gate an extra hour and a half at San Francisco with an issue loading the luggage so it really made it difficult once we landed in Tokyo.


Our connecting flight to Osaka from Tokyo was on Japan Airlines and the staff at the airport did an amazing job of helping us get through immigration, collecting our luggage, clearing customs and then finally making our flight with about 2 minutes to spare.  We did have to run through the airport but we made it.  The flight on Japan Airlines was smooth and uneventful.  The most memorable aspect of the flight was how clean the airline was and the way the flight attendants checked on us about 5 times during the hour long flight.


During our excursions in the city we often traveled by a chartered bus but we also used taxis.  Several times while traveling in taxis I sat in the front seat on the left side, opposite of how we drive in the United States.  I sometimes caught myself catching my breath as we made some quick turns in traffic unto what appeared to be the wrong lane. 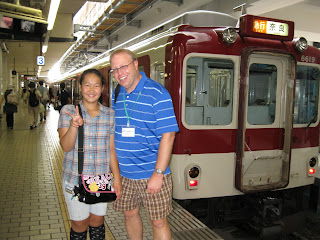 The subways in Kyoto, Osaka and Tokyo were always clean and on time.  Tokyo had the busiest subways by far but nothing that we couldn’t handle and everyone was very respectful when the cars became full.  Whenever we had a question about which train to take the individuals we asked were always very gracious and helpful.  The program gave us a credit card preloaded with enough yen so we could use it throughout our stay and not worry about buying individual tickets each time.  All we had to do was hold it up to the sensor and then pass through the gate – very smooth. 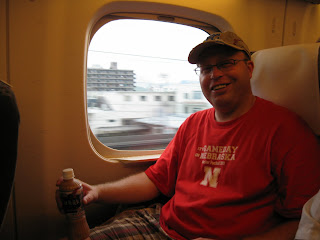 My favorite mode of transportation in Japan was by far the bullet train – or as it is called in Japan, the “Shinkansen”. I knew we would be traveling on the bullet train because it appeared on our initial itinerary and it was one of the things I was most excited about experiencing while in Japan.  I can remember reading about the bullet train when I was a kid growing up and thinking it would be an awesome way to travel.  We rode the bullet train twice – one from Kyoto to Hiroshima and then later from Hiroshima to Tokyo. 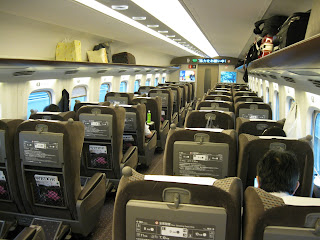 The first trip – Kyoto to Hiroshima – was about 2 hours long.  It was still light when I started so we could see cities and the countryside as we zoomed along at roughly 170 miles per hour.  The tour organizer had arranged an upgrade for us to the first class car, known as the “green car”.  The seats were spacious and comfortable.  Each seat had its own power outlet to accommodate a laptop.  Attendants came through the car offering to sell beverages or snacks.  It was a very comfortable trip.


The second trip – from Hiroshima to Tokyo – was roughly 4 hours.  Again, we started in daylight and then it gradually got darker as night fell.  Since it was dark we did not see Mt. Fuji on this trip.  We didn’t score the green car this time but the regular class tickets still offered many of the same services and the seats were just a tad smaller but still very comfortable.  We grabbed a bento box and headed for Tokyo. The bullet train made several stops along the way but each one lasted only a couple of minutes.  The bullet train is always exactly on time and gives you a couple of minutes to board at each stop before zipping on to the next destination.  A study done in 2003 showed that in over 160,000 train trips the average arrival time of each train was within 6 seconds of its scheduled stop.  I also found it amazing that in its 45 year history transporting more than 7 billion passengers there has never been a fatality due to derailments or collisions! 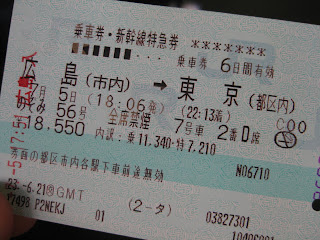 During our time in Japan we utilized public transportation often and found it easy, relatively cheap on consistently on time.  It made me wish that I lived in a city where I could get on a subway or train and head down to the baseball game or a visit to a museum.    Overall I was very impressed with transportation in Japan and found it to be enjoyable.
Posted by Eric Langhorst at 4:26 PM