This is the third in a series of blog posts describing my experiences as part of the 2011 Keizai Koho Center Fellowship Program. 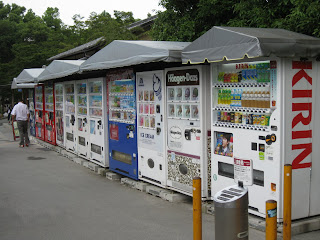 Row of vending machines in Koyto
For some reasons I was fascinated with the number and quality of the vending machines in Japan.  Vending machines were everywhere and they had tons of choices.  Some vending machines for beverages had almost 40 choices.  I admittedly drink too much soda – Diet Pepsi is my vice at home – and so I would occasionally use the vending machines to get my daily caffeine fix.  I never saw Diet Pepsi but they did have Pepsi Max and Pepsi Dry in the Japanese market.  I tried the special Pepsi Max but it had a different taste than the same product in the states and I generally drank Coca-Cola since it was more readily available.  The restaurants also often had Coke and my host family bought Coke in advance of my home stay because they had once hosted some American students and they drank a lot of Coke while visiting their house. 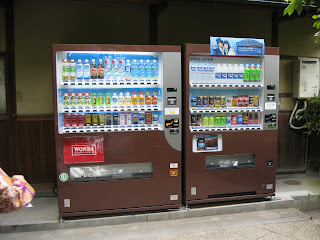 Vending machines in Japan
Since it was extremely hot during our stay in Japan I would sometimes stop at a vending machine to purchase something to drink.  I tried some of the fruit juices and thought they were pretty good.  My favorite new drink that I discovered was milk tea.  This drink, as stated, is a mix of milk and tea - sort of like buying a Starbucks Frappuccino at a convenience mark mart in a bottle but with less kick.  It was a great drink to cool down when I didn’t want a soda.  I drank milk tea quite a bit while in Japan and hope to find it somewhere in the states for a treat. 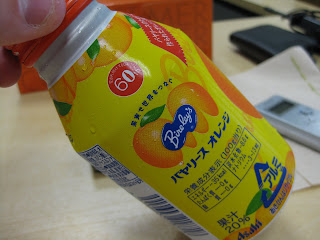 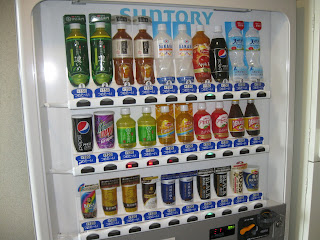 We also did see a number of vending machines selling food items, ice cream, newspapers and cigarettes.  It was also surprising to see that you could buy beer and even sake in a vending machine.  I can’t imagine a vending machine in the states that would sell alcohol. 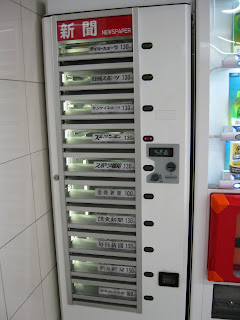 Vending machine for newspapers in Japan
Posted by Eric Langhorst at 4:45 PM